If you have purchased the Smart-Fx base, everything is ready to use.  All you need to do is connect the motors and lights used on the model.  See Connections later in this page.  Programming the Smart-Fx is covered in detail in the Script Files section. Insert batteries or attach the mains power supply adaptor.  Switch the Smart-Fx on.  After a short pause you should hear a confirmation sound:

Adjust the volume control if you do not hear this.  Press the start button to start the demonstration effects.

The power supply may be battery or mains “power brick”.  6 to 12 volts DC.  Connect to the screw terminals on the Smart-Fx controller.  Polarity is as shown in the picture below. 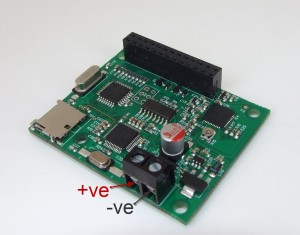 Connect the start button to the two pins marked “SWT” on the connection block.  It does not matter which way around you connect the individual wires.

There are channel connections for LED lights and 2 for motors.  LEDs can also be connected to the Motor channels.

This file is optional but it is recommended you have it.  Config.txt contains 6 numbers (parameters) that define the operation of the Smart-Fx. All the parameters must be present in the file.  The parameters are:

The 2 motor channels scripted in Motor1.txt and Motor2.txt have a variable voltage output.  Setting the Source Voltage and Max Motor Voltage parameters in the Config file allows the voltage to vary correctly between 0% and 100% where 100% represents the motor’s maximum voltage.  The following example Config.txt shows how this works for a 12V Supply Voltage and 1.5V and 3V motors.

The channel script files are simple text files and can be created using any text editor like Notepad.  They consist of a series of 1-character commands followed by numbers, one command per line.  The commands and numbers are separated by spaces.  The commands may be entered in upper or lower case and the lines may begin with spaces or tab characters.  You may also use a / character to insert comments.

The available commands are shown in the table below.  numeric values are shown between angle brackets e.g. <value> .  A <period> parameter is always measured in centiseconds (1/100 ths of a second) so a value of 234 represents 234 hundredths of a second (or 2.34 seconds).   The maximum value allowed is 65534 which is nearly 11 minutes.

When power is applied to the Smart-Fx, the SD card is scanned.  The scripts are compiled.  If all goes well, the LoadGood.mp3 file will play over the speaker.  If any of the scripts has an error, the LoadErr.mp3 file will play.  LoadGood.mp3 and LoadErr.mp3 are optional, you may remove them but you will not get feedback on the status of the script compile.

The programming in the Smart-Fx allows you to match the operation of the lights and motors to a soundtrack.  When the start button is pressed, the Smart-Fx plays the soundtrack and runs the scripts which are instructions to operate the motors and lights in a specific way. 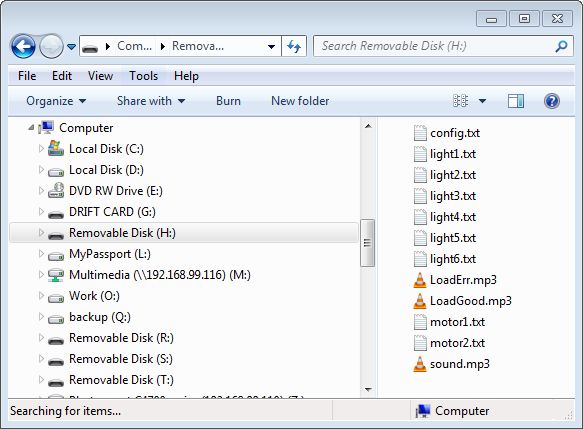 Double-click on any of the script files, light1.txt, light2.txt .. motor1.txt etc. to open them in an editor.  Opening light1.txt will look like this: 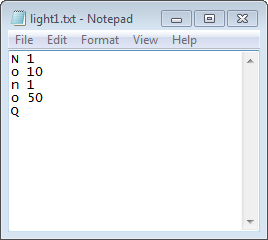 This is the script that controls light 1.  This is what it means:

This has the effect of a strobing light with two short flashes followed by a longer pause and repeats.

To change the behaviour of light 1, simply change the script.  For example, edit the file so it looks like: 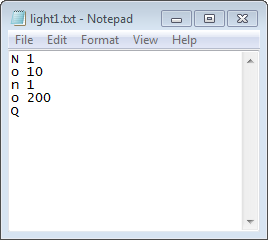 The ‘o 50’ line is changed to ‘o 200’.  This will lengthen the delay between the flashes.  Save the file back to the Micro-SD card and eject the card from the PC.  Be careful to do this properly to make sure any changes to the card are saved.  Reinsert the Micro-SD card into Smart-Fx.  If the script is ok, you will hear the LoadGood sound again.  Press the Start button and observe the changed sequence on light 1.